By default you certainly want the WAL, no doubt about that. Another option to get more data into memory is to reduce the block size of the data stored in disk. It hbase write ahead log performance bicycle committed in Hadoop 0.

Next there is a file called oldlogfile. This is a good place to talk about the following obscure message you may see in your logs: Over time we are gathering that way a bunch of log files that need to be maintained as well. HBase followed that principle for pretty much the same reasons.

This protects against data loss in the event of a failure before MemStore contents are written to disk. So at the end of opening all storage files the HLog is initialized to reflect where persisting has ended and where to continue.

D15 v2 instance is isolated to hardware dedicated to a single customer. That way at least all "clean" regions can be deployed instantly. For the term itself please read here. Note though that when this message is printed the server goes into a special mode trying to force flushing out edits to reduce the number of logs required to be kept.

There are two different approaches to pre-creating splits. A useful pattern to speed up the bulk import process is to pre-create empty regions. It flushes out records in batches. You will see in a minute where this is used. If a process dies while writing the data the file is pretty much considered lost.

This also removes the small reference files as well as the original data file in the original region. But again this did not solve the issue entirely. If set to true it leaves the syncing of changes to the log to the newly added LogSyncer class and thread.

As the picture shows it is the Trailer that has the pointers to the other blocks and it is written at the end of persisting the data to the file, finalizing the now immutable data store.

We will now have a look at how they work together but also where there are exceptions to the rule. HDFS append, hflush, hsync, sync They are a result of so called "log splits".

D v2 instances offer a powerful combination of CPU, memory and local disk. Distributed Log Splitting As remarked splitting the log is an issue when regions need to be redeployed.

Your data is persisted in Azure Storage and you are bringing up clusters only when you need to read and write the data. They are created by one of the exceptions I mentioned earlier as far as file access is concerned.

For that reason the HMaster cannot redeploy any region from a crashed server until it has split the logs for that very server. You gain extra performance but need to take extra care that no data was lost during the import. Here are some of the noteworthy ones.

It checks what the highest sequence number written to a storage file is, because up to that number all edits are persisted. 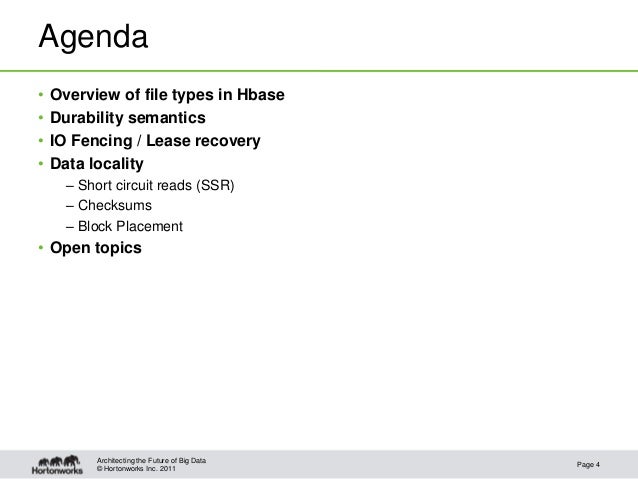 And as mentioned as well it is then written to a SequenceFile. This functionality is provided by the LogFlusher class and thread. Minor compactions will usually pick up a couple of the smaller StoreFiles hFiles and rewrite them as one.

Each of the Store instances can in turn have one or more StoreFile instances, which are lightweight wrappers around the actual storage file called HFile.

This is why these encoding algorithms are good for improving cache efficiency. There are two types of compactions in HBase: So if the server crashes it can effectively replay that log to get everything up to where the server should have been just before the crash.

Further, due to the internal caching in Compression codec, the smallest possible block size would be around 20KBKB. HBase Architecture Write-Ahead Log. What is the write-ahead log (WAL), you ask?

In a previous article we looked at the general storage architecture of HBase. One thing that was mentioned was the WAL. This post explains how the log works in detail, but bear in mind that it describes the current version, which is The Write Ahead Log (WAL) records all changes to data in HBase, to file-based storage.

if a RegionServer crashes or becomes unavailable before the MemStore is flushed, the WAL ensures that the changes to the data can be replayed. HBase's write-ahead-log (WAL) can now be configured to use multiple HDFS pipelines in parallel to provide better write throughput for clusters by using additional disks.

HBase's write-ahead-log (WAL) can now be configured to use multiple HDFS pipelines in parallel to provide better write throughput for clusters by using additional disks. By default, HBase will still use only a single HDFS-based WAL. Sep 02,  · HDInsight HBase: 9 things you must do to get great HBase performance Problem comes when you try creating a large cluster from existing HBase storage as Write Ahead Log (WAL) needs be replayed on regions as data was not flushed from memory when you deleted the cluster[Data is in WAL but not in hFiles].

Write Ahead Log (WAL) The WAL is a log file that records all changes to data until the data is successfully written to disk (MemStore is flushed). This protects against data loss in the event of a failure before MemStore contents are written to disk.